Eight multi-billion-dollar corporations own or control about 90% of existing TV networks.


These eight companies own most of the networks you want, as well as many of those you don’t – and they won’t let you have the most-popular networks unless you get the less-popular ones, too. Its simple economics: they need more viewers for these less-popular networks to increase their subscriber fees and their advertising fees so that they make more money. 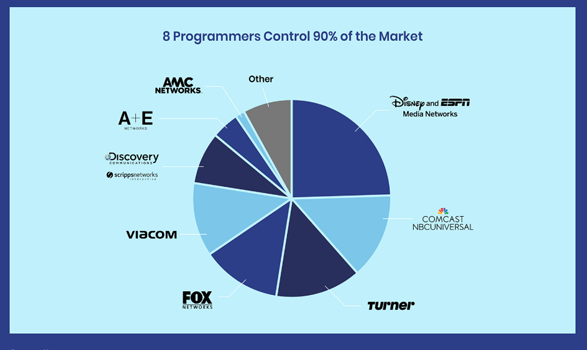 Another trend has developed where Network or Station owners are dictating how and what networks we sell our customers, limiting your choice and control. In addition to huge fee increases, their demands include bundling their family of networks on our most popular and widely distributed TV tiers and packages. That means you’d be forced to pay for channels you do not want and are not asking for - channels that have little or low viewership.

We strive to provide the best TV choices, at a value that makes sense for you and your family as well as networks you request the most.

The Network may launch a public dispute. Oftentimes, you’ll hear the Network say that they’re asking for only “pennies a day.” That may sound reasonable at first, but let’s do the math…

Say for instance you have a TV package that includes 70 channels. Assume each Network or Station owner is asking for a $0.03 increase per channel, per day.