Join the Conversation on October 29 with #grandeinternetday

Grande Communications commemorates Internet Day on October 29, 2016, by engaging customers with fun, lively “Did You Know?” postings on Facebook and Twitter. The company plans to post a sequence of graphics incorporating interesting facts about the growth and popularity of the internet since its birth 45 years ago while striking up conversations with Grande customers on how the internet has changed how they communicate, interact, and live their lives. Grande also celebrates 17 years this November as Texas’ industry-leading provider of high-speed internet, digital TV, and phone service with over 165,000 satisfied customers today and a series of ‘firsts’ and #1’s.

Unstoppable Grande trumped the competition by being the first internet provider to launch 1 Gig in Austin in 2014 and in San Antonio in 2015, providing customers with exclusive access to the innovative and highly demanded speed. 1 Gig is currently available to Grande customers at over 30,000 Texas addresses. Subsequently, Grande introduced new and distinctive speed tiers of 200 Mbps, 300 Mbps, and 400 Mbps, demonstrating Grande’s commitment to offering customers great service and higher speed options at the most affordable prices.

Additionally, in 2014 Grande was the first cable provider in Texas to integrate Netflix into the channel lineup as part of an ongoing effort to provide convenience and choice for customers through a groundbreaking partnership with TiVo. According to Netflix, Grande has consistently ranked #1 in the nation amongst internet providers for streaming performance during peak times allowing customers to enjoy a superior and seamless Netflix viewing experience. 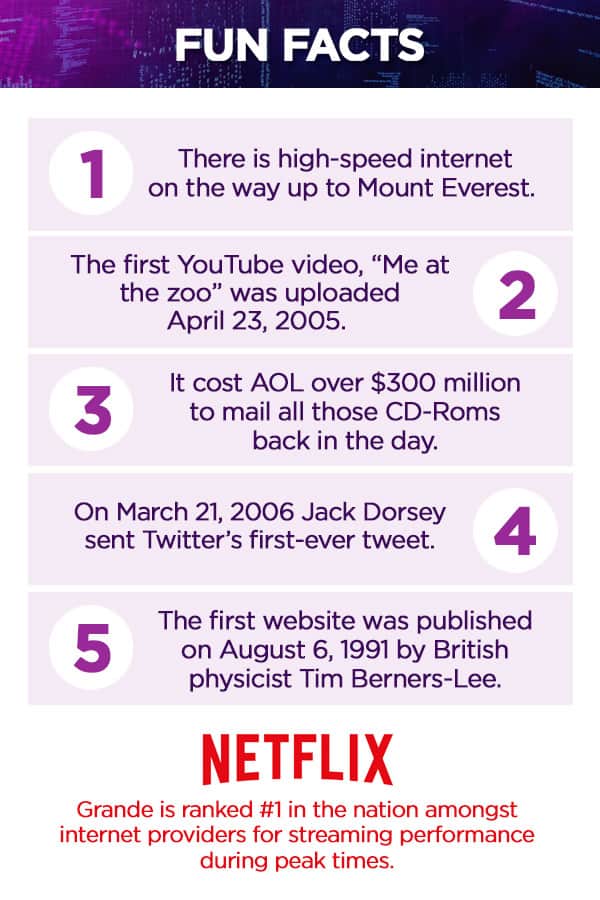