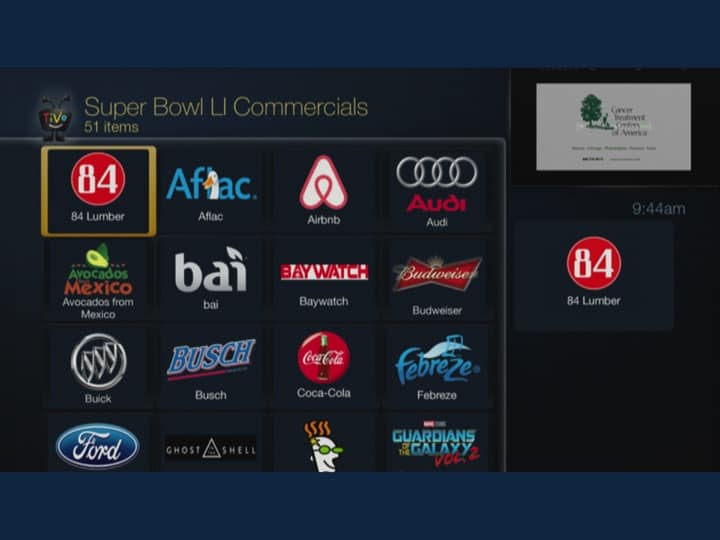 The following are the top 10 commercials and promotions from the big game, according to TiVo:

TiVo’s uses second-by-second data and measurement tools to rank the top commercials from this year’s championship game, based on commercial retention compared to overall program viewership.

Top Moment of the Broadcast

For the seventh consecutive year, TiVo found viewership for the halftime show exceeding that of the overall game. Known for her over-the-top ensembles and electronic dance moves, Lady Gaga’s high-tech halftime performance was exceedingly well-received, generating 41 thousand tweets per minute. The pyrotechnic showcase ended with this year’s top moment of the broadcast including a theatric mic drop and jump off the stage. Based on data from the last nine years, this year’s halftime show ranked third right behind 2012’s performance by Madonna and 2015’s halftime show featuring Katy Perry and Lenny Kravitz.

The most engaging in-game moments all took place within the last 30 minutes of the game: (1) At second and goal from the 2-yard line in overtime, Brady tosses the ball to James White, who scores a touchdown for the Patriots’ victory. (2) With three seconds left in regulation time, Brady hands off to Dion Lewis, who goes out of bounds at the New England 48-yard line, leading to the first overtime in NFL championship history. (3) At the 1-yard line, Brady hands off to James White, who crosses the goal line for a touchdown. After the 2-point conversion, the game is tied at 28-28 with less than a minute remaining in the game.

TiVo subscribers can view all of this year’s top commercials from their TiVo devices. Go to TiVo Central and either hit 5 on the TiVo remote or go to “Find TV Movies and Videos” > “Browse TV & Movies” > “New & Notable.”Super

TiVo’s analysis was prepared using aggregated, anonymous, live + same-day second-by-second audience measurement data from households with the Emmy-award winning TiVo® service. TiVo gauges the interest in programming content by measuring the percentage of the TiVo audience watching or re-watching any given moment in the programming. The most engaging ads and promotions are determined by looking for spots with the biggest bump in viewership relative to the surrounding 15 minutes of programming, offering a true reflection of change in viewership.

Services subject to availability and may not be available in all areas. Customer must be on the Grande Network for TiVo Stream to operate. Please contact Grande for details.

* Multi-Room TiVo and service subscription required and sold separately. TiVo Stream is sold separately and can be ordered for an additional fee. MoCA or Ethernet connection required. iPad, iPhone, or iPod touch running iOS5.1 or later required and sold separately. One Multi-Room TiVo is capable of streaming up to three shows at once. Two Multi-Room TiVo's required to stream four shows simultaneously. Ability to stream multiple shows is also dependent on factors including bit rate, resolution, screen size and available bandwidth. To watch "live TV" a recording must first be initiated and there may be a momentary delay. Not all programs may be transferred using TiVo Stream due to the use of copy protection mechanisms permitted under the FCC's encoding rules. Some shows cannot be transferred due to the copy protection assigned them by the program provider. These shows usually are marked with a red circle-slash icon (47 C.F.R. 76.1904). TiVo Stream devices sold/provide by Grande will only work with TiVo Premiere's that are also provided by Grande. They will not work on non-Grande TiVo Premiere's.

Schedule recordings from the web

How To Use Your Remote